Impressions from the Seine: Paris to Normandy

<– Back to River Cruises

Unique experiences include a Tauck Exclusive evening at Château du Taillis, a palatial private residence in Normandy, where guests will enjoy a reception, dinner, music, and a tour of the château’s small museum of World War II artifacts; and a private early-opening guided visit to the home and gardens of the painter Claude Monet at Giverny, where he painted many masterpieces, followed by free time to explore the nearby Impressionist Museum as you please; and in Paris, a choice of activities including a visit to Père Lachaise Cemetery, known for its ornate tombs and notable “residents” linked to Parisian history, like Marcel Proust, Frederic Chopin, and Edith Piaf, and a choice of museum visit.

Highlights include Versailles, for guided visit inside Louis XIV’s magnificent palace and gardens at Château de Versailles; Rouen, where a walking tour includes visits to Cathédrale de Rouen and Joan of Arc Square with a local guide; the D-Day Beaches of Normandy, with guided visits to Pont du Hoc, Omaha Beach, and the American Cemetery along with lunch at the Omaha Beach Club; Les Andelys for a guided walking tour and a visit to Château Gaillard; and Tilly, for cider and Calvados tastings and a Normandy farm tour.

River cruise starting at $5,990* CAD per person, based on double occupancy

Join us tonight for the captain’s briefing, followed by a welcome reception and dinner in the Compass Rose.

Please note: select departures will feature a private, after-hours guided visit at Musée du Louvre (inquire at booking). Tauck guests skip the lines – and the general public – on a private pre-opening visit to the incomparable Musée du Louvre, a showcase of Impressionist paintings. The Louvre, housed in a former royal palace, astounds with an incomparable collection of old masters, sculptures and antiquities, including the beguiling Mona Lisa and the wingless Venus de Milo.

Paris is home to charming arrondissements and instantly recognizable icons, from the Eiffel Tower to the Arc de Triomphe watching over the Champs-Élysées, filled with lamp-lit bridges spanning the River Seine. A choice of excursions this morning includes an orientation tour and a visit inside magnificent Opéra Garnier.

Alternatively, go on a walking tour of the Latin Quarter and St. Germain and learn about the rich literary history of the area as you stroll through Luxembourg Gardens past the neoclassical Pantheon and Sorbonne University.

This afternoon, enjoy free time to explore Paris as you choose or join our local guide for a visit to the Pantheon – explore Parisian and French history through the stories of those buried there. Spend the evening at leisure as your riverboat charts a course along the Seine for the inimitable Château de Versailles; cocktail hour is followed by dinner in Compass Rose.

The epicenter of French royal power until 1789, King Louis XIV’s Château de Versailles epitomized the royal lifestyles in Old World Europe. Standing on the grounds of a once humble hunting lodge, the palace at Versailles was built to impress, inside and out.

Your visit here today includes a look inside the most famous of its 700 rooms, the gilded Hall of Mirrors and the king’s over the top royal apartments, and a tour of the gardens, one of the biggest in the world.

Spend the remainder of the day enjoying the amenities of your riverboat along with picturesque scenery as you cruise along the Seine to Rouen.

Your riverboat docks in Rouen today, the historic capital of Normandy. A medieval city of history amidst half-timbered houses and storied squares, Rouen has been immortalized in paint and prose. One of its most immortalized residents is Joan of Arc who lost her fight and life here.

On your guided visit with a local guide, hear tales of her triumphs and trials, walking in places where she lived and died. You may recognize the Cathedral Notre Dame de Rouen the moment you see it; Monet painted it more than thirty times to capture the ever-changing play of light on it during different times of the day. Even the city’s astronomic clock gracing a Renaissance arch has acquired renowned acclaim for its timely efficiency since 1527.

Enjoy time at leisure to explore the sights as you wish before returning to the riverboat for an afternoon at leisure. This evening join us for a Tauck Exclusive gala reception and dinner with music at the 16th-century Château du Taillis in Duclair, a true Renaissance treasure.

Excursion: Guided tour of the Beaches of Normandy

2019 marks the 75th anniversary of the Allied invasion of Normandy in World II. Today’s poignant visit to the beaches of Normandy is led by a local guide knowledgeable about the day’s events, the heroics and the losses of this historic Allied operation of June 6, 1944, as well as its Allied liberation of Western Europe. See Pointe du Hoc where US Army Rangers scaled the 100-foot-high, crater-riddled cliffs and seized the German artillery pieces to keep them from firing on the American troops landing at Omaha and Utah beaches.

Visit Omaha Beach, one of the five landing areas of the Normandy Invasion of World War II, today dotted with the remains of German bunkers. Pause at the Normandy American Cemetery and Memorial overlooking Omaha Beach and the English Channel, the final resting place for more than 9,300 troops who lost their lives in World War II.

After lunch, meet your riverboat back in Caudebec-en-Caux. Dine at your leisure tonight.

Look up as your riverboat pulls into Les Andelys this morning to see the ruins of Château Gaillard reigning atop its hillside perch. Built by Richard the Lionheart, King of England in 1197, it was considered the mightiest castle of its time. Exactly how did an English king lay claim to this important strategic stronghold in France? At the time, Richard I of England was the feudal duke of Normandy and he wanted to keep it that way. He constructed the fortress with the help of more than 6,000 workers in just one year in an attempt to keep the King of France from invading Normandy. Richard carefully chose the site for his fortress, building it where the Seine takes a sharp curve at Les Andelys.

Take a walking tour of the town and the castle ruins above before a drive into the countryside where apples are king. A tasting and visit to a local farm shares the bounty of the land in the form of freshly pressed cider and aged brandy with pâte and confiture, preserved fruit.

Cruise to Vernon after lunch onboard ship, arriving in time for an orientation walk of the town before dinner. Tonight, get ready to kick it up a few notches when dancers come aboard to perform the Parisian Can-Can!

A Tauck Exclusive early opening visit to Monet’s house and gardens in Giverny gives you the rare privilege of experiencing the beauty of his home in the changing light of the day as Monet did every morning. Go inside his pink house, left exactly as it was when the artist and his family lived here, and stroll through painted gardens you may have seen in Paris on your museum visit. Flowers, planted according to their colors, are left to grow freely in the gardens and lilies bloom all summer long in the water garden where you will see the famous Japanese bridge covered with wisterias, along with smaller bridges, weeping willows and a bamboo wood. You will have time to visit Giverny’s Impressionist Museum at your leisure.

Back aboard ship, join in a painting class led by a local artist as he shares insights, tips and techniques about the Impressionist works you have seen during the cruise, in preparation for creating your own impressive work of art.

Join us onboard your ship this evening for a farewell reception and dinner as we bid adieu to our new friends. 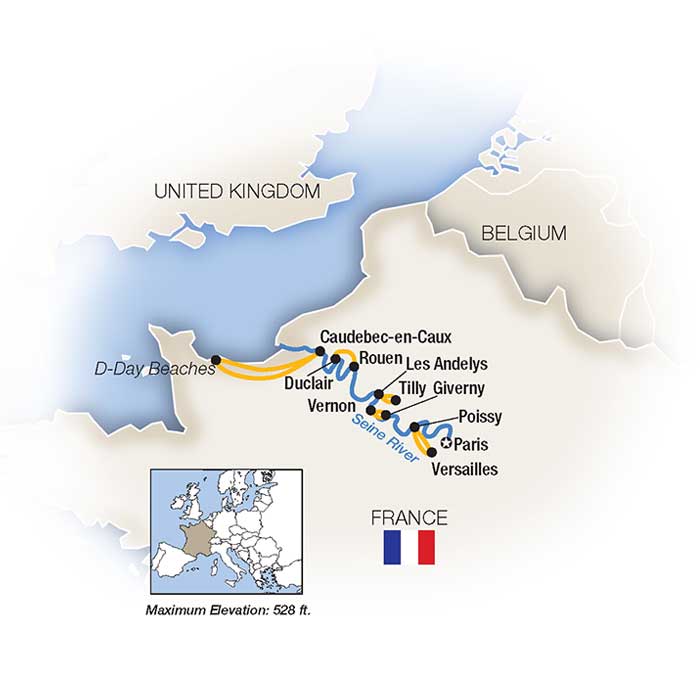 Interested in the itinerary above? Click on the “START PLANNING” button below and reference “Impressions from the Seine” in the form, or give us a call at 587.997.5969 to book.

An adventure designed specifically for you

Let us work with you to tailor a journey based on your travel style and interests. We can use the existing itinerary above as a foundation, or build one from scratch to create your ideal vacation. Connect with us to start the conversation. 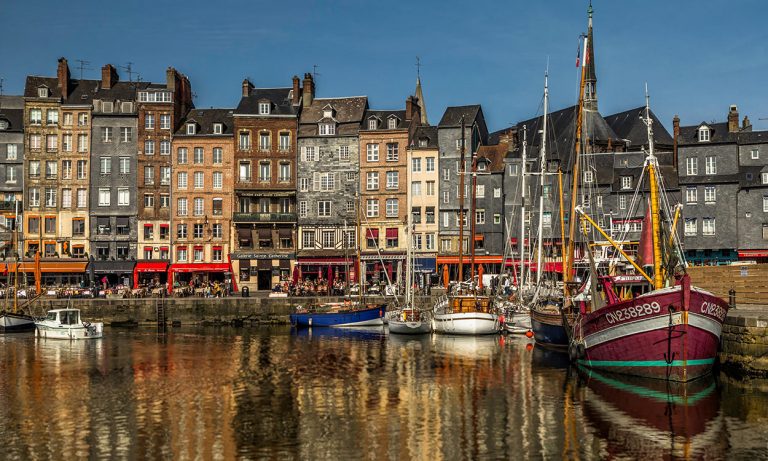 Cruise the Seine River in France 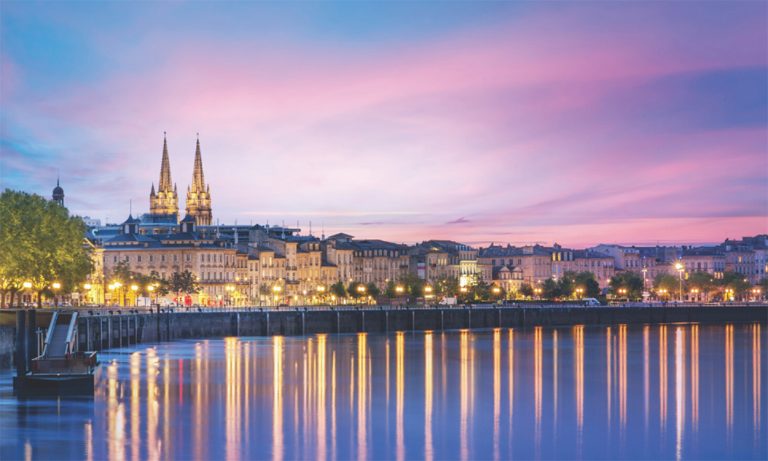 Cruise the Garonne and Dordogne Rivers in France 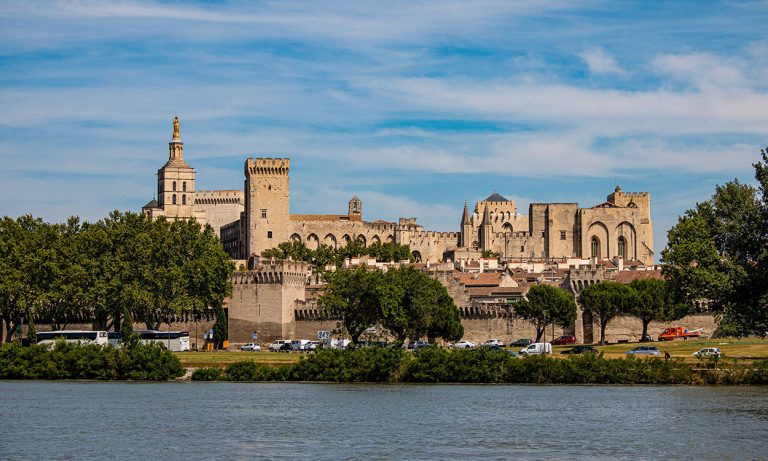 Cruise the Rhône River in France

*Prices are per person, based on double occupancy and subject to change and availability.